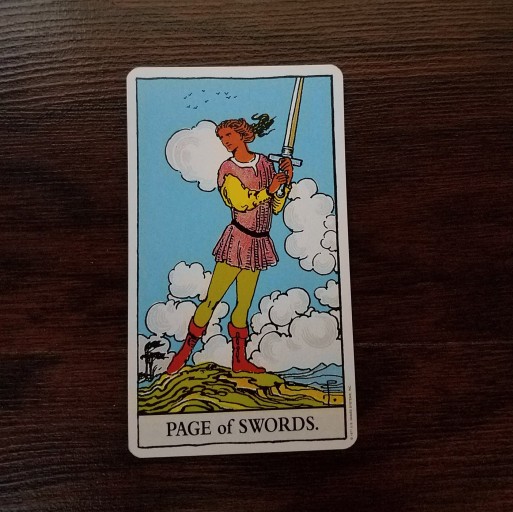 The clouds in the Page card are similar to those clouds we’ve seen in the Ace cards – they’re those big ideas that are bursting from seemingly no where.  The birds flying high in the sky are a representation of higher level thinking and high ideals.  They also represent the page’s ability to turn adversity into opportunity.  It appears to be windy (see the tree in the background swaying?) but the Page is bolding looking out into the world.  He’s fearless and isn’g toing to back down.

Upright meaning: When the Page of Swords appears, this is a card that’s all about enthusiasm and passion.  It’s a call on us to bring our voice and our ideas forward.  You’re probably aware of some challenges you’ll face, but the card tells you to go for it.  This is also a time to ask questions.  It’s a call to be a student and don’t let your curiousity rest.  Use your voice and your mind for good.  While your sharp mind and enthusiasm will suit you well, the page lacks experience – that’s why embracing the student role and asking questions is so important here.

Reversed meaning: When the Page of Swords comes up in the reversed position, this is someone who may be on the defense rather than the offense and is protecting his ideas or is acting in a way that is intellectually superior to those around him.  This can also be an indication that you’ve been talking a big talk lately, but there isn’t much in terms of actions to support your big game.  If that’s the case, make a plan.  Return to the upright position by again becoming the student.  This isn’t a call to be questioning everything (try not to be that annoying kid always asking why!) but it is a call to be constructive.  Challenge ideas that matter to you  Finally, the card can come up in the reversed position as a fear of speaking publically.  If that resonates with you, don’t be afraid to let your voice be heard.  People want to know your thoughts, especially if your point of view is different from others.

The Page of Swords reminds us to hold on to what inspires us and to use our voice and our mind for the greater good.  It’s also a reminder to stay curious, be a student, and never stop asking questions.  The Page of Swords is our potential for greatness.