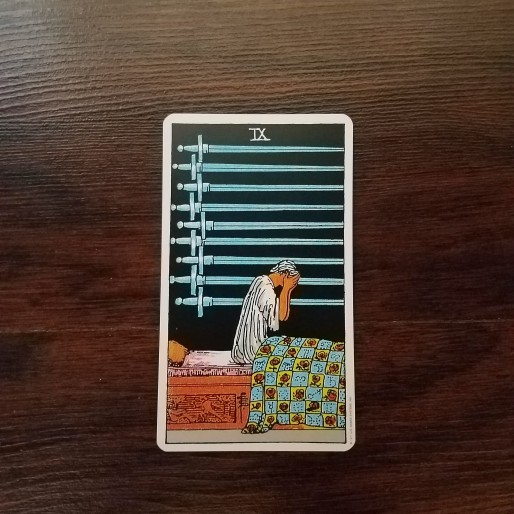 The Nine of Swords comes up when we haven’t learned the lessons of the Eight of Swords.  Our negative thinking and misconceptions about our situation has become worse, and as a result, we’re suffering from nightmares, anxiety, or depression.  The Nine of Swords is one of the scariest looking cards and speaks to the fear that creeps up on us at night.  The card is only one of a handful that have a black background.  The bed-frame depicts a duel where someone is being defeated by another, and the bedspread is covered with red roses and astrological signs.  There is a sense that the figure in the card is suffering some kind of loss, and that they may be blaming themselves for the loss.  The Nine of Swords, however, tells us that this loss was inevitable.  The loss would have happened one way or the other – it’s time to stop blaming yourself. END_OF_DOCUMENT_TOKEN_TO_BE_REPLACED 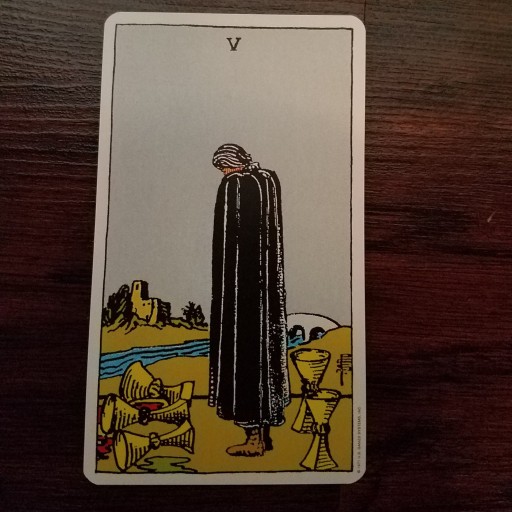 Like the other 5s in the deck, the Five of Cups is a contraction card.  The card is a card of loss and of sorrow, but also reminds us that in those moments of immense grief, we have cups that are still left standing.   END_OF_DOCUMENT_TOKEN_TO_BE_REPLACED